Being that this has been our website holding page for the last couple of months, it feels only appropriate that it’s the first thing posted to new site.

It comes from XKCD – we linked it through, and one or two people ended thinking that XKCD was our new project. Which is a nice thought, not to mention a huge compliment.

XKCD’s stuff sometimes feels hit and miss, but it’s always hitting the mark for somebody. It’s not trying to please all the people all the time. It’s finding its audience strip by strip, panel by panel, one day at a time. Because audiences are on the move these days, more than ever. They’re the electronic peripatetic, altering their mindset almost as quickly as their map co-ordinates.

It helps if you have a map. Fortunately XKCD have that covered too: 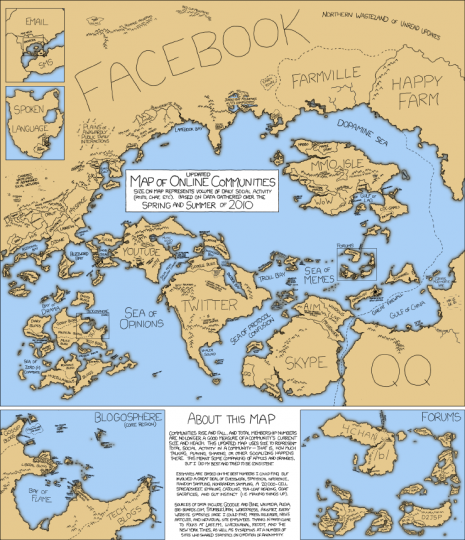 It’s an update to a version they published in spring 2007: 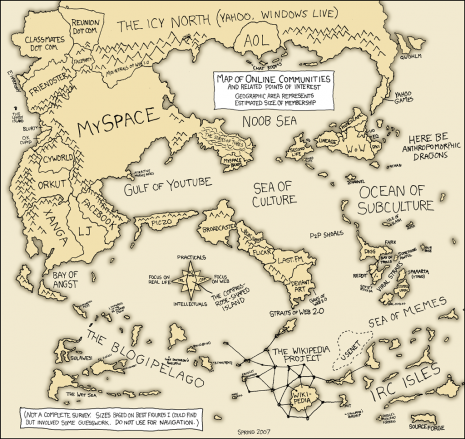 Even the most cursory examination tells you how much has changed in just three years. See that place called Facebook, they swapped spots with MySpace, and grabbed some serious land from Yahoo! and Windows Live in the process. Just be glad no-one started selling nukes to social networks, otherwise Mark Zuckerberg wouldn’t be the youngest billionaire in the world, he’d be the only one.

Meanwhile, behind the Great Firewall of China, something most of us have probably never even heard of – ‘QQ‘, the country’s most popular instant messaging client, boasting over 100 million simultaneous accounts.

And, as ever, the devil is in the detail. Look a bit more closely (and you can click on either map to do that) and and discover the ‘Jungle Bay Mountains of “It’s Complicated“‘, the ‘Sarah Palin USA‘ (shouldn’t that be ‘Sarah Palinsula’?) at Twitter’s southernmost point, and the tiny island of ‘Ping‘ way down there in the middle of pretty much nowhere.

I could go on all day. It’s a new world out there, a world of opportunity, borders constantly being redrawn, whole continents still waiting to be discovered.

At least we have a map.

If we can just figure out how to read it…