Back in our previous lives Saf and I were both involved in some fairly pioneering work with ‘augmented reality’ (AR), in the context of international online campaigns for Star Trek (above) and Transformers (below).

Since then we’ve been taking a back-seat on AR, waiting for the tech to catch up now that the novelty has passed and the endgame is mass engagement. From some of the examples we’ve seen over recent weeks it looks like things are at least going in the right direction.

We’ve always taken the view that mobile would be a major game-changer, neatly illustrated by, well, a game:

For the full story behind Vertigore Games’ Falcon Gunner there’s a great little piece on Wired.com, the essence of which is that Vertigore coded this from the ground up in C, and it shows. No sign of any patchy plug-ins or pricey software licenses, just a seamless gaming experience integrating camera, accelerometer, compass and, new to the iPhone 4, a 3-axis gyroscope. 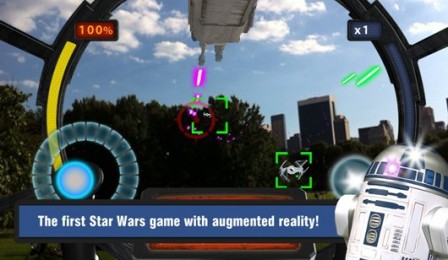 Whereas a lot of the early AR relied on an element of image recognition, using so-called ‘markers’ as a plane onto which to project 3D images and animations, Falcon Gunner uses the iPhone’s various sensory features to make a best guess about how to augment the environment around you. It also invites the player to make their own creative contribution, in terms of choosing a fun place to play – I’d probably head to the top of the nearest skyscraper in search of the best possible dogfight.

If you are going to use a marker, why not make it something you can augment in a useful way? I understand that some people would consider projecting a virtual pint onto a funny-looking beermat useful, but for the rest of us how about this:

We tried this out in the office and it wasn’t quite the experience you see here, but the potential is plain to see and it clearly goes some way to fulfilling it. Imagine once you take the functionality out of your phone and put it into a pair of glasses, or a contact lens, or an implant – we’re into Babelfish territory here, and we don’t even have to put pond life in our ears.

No prizes for guessing what makes the ultimate marker:

Yup, you do. This may just be the work of a gifted hacker, but when you have Microsoft’s resources at your disposal and you can access the program through the front door, the potential is extraordinary. Here’s Steve Ballmer (kind of) introducing ‘Avatar Kinect’ at CES 2011 yesterday:

Anybody who ever spent a decent chunk of time in Second Life understands the importance of body language. Without it, inhabitants of virtual worlds spend the whole time dancing, having wildly unimaginative sex or sitting with their legs crossed. With body-tracking like this we can express our virtual selves through physical gestures and facial expressions. Yup, fun, but also brilliantly efficient compared to having to spell it out via the medium of speech or, god help us, the keyboard.

Albeit that platform-owners like Microsoft, PlayStation and Apple will see themselves as the custodians of commercial AR, the creative boundaries will go on being pushed back by those who don’t need to make a business argument before they do something. Like, say, transforming themselves into Ultra Seven:

If that just isn’t realistic enough for you, well, maybe you’re better off sticking to reality. It’s reliable, it’s predictable and you can feel all the safer in the knowledge that it now comes equipped with real superheroes: