Taking the law into your own hands

With the May launch of the @thefirerises Twitter feed and an accompanying first glimpse of Tom Hardy’s Bane (above), the campaign for Christopher Nolan’s third Batman movie, The Dark Knight Rises, is officially under way.

It looked for a moment last week like it was gathering pace already, with the appearance of the TheFireRises YouTube channel. It features three videos (the first and most popular of which is embedded below) showing blurry footage of riots in Gotham’s own Arkham Asylum, already closing in on half a million views between them, and a link to an associated Facebook page.

The point at which this really piqued my interest was when doubt was first cast on whether these are actually part of any official campaign, or if they are fan-created. On the one hand, reputable sites continue to call them out as being the real deal…

…while on the other, a growing number of movie blogs and fan sites who’ve looked a little more closely at the videos are dismissing them out of hand:

I can’t believe reputable sites and magazines are posting those fan created Dark Knight Rises videos as if they were real.

It’s testimony to 42 Entertainment‘s ground-breaking campaign for The Dark Knight (a sprawling ‘alternate reality game’ (ARG) entitled Why So Serious? neatly encapsulated in the video below) that anticipation for The Dark Knight Rises’ campaign (let alone the film) is running so high, with movie bloggers devoting column inches to the question of whether Warner Bros. has even asked 42 Entertainment back.

Either way, whichever agency they employ, there’s no question of Warner Bros. repeating the success of Why So Serious? by simply replicating the format. The success of the campaign owed much to the fact that it was the first of its kind, promoting a hugely anticipated, mainstream Hollywood release in a way that opened people’s eyes to the possibilities of immersive, multi-platform marketing, fuelled by the quasi-religious fervour of a fanatical core fan-base and disseminated to a wider audience via the low/no-cost distribution channels of the social web. Some irony then, if the last campaign hijacked platforms originally developed as conduits for user-generated content, that the shoe may now be on the other foot.

On the one hand this presents a real problem for Warner Bros. Judging by the comments on some of the blogs presenting these as authentic, large swathes of potential audience won’t stick around long enough to find out otherwise. For them the clips may prove an underwhelming first glimpse, lacking in production values and sending mixed or plain inaccurate messages about the film.

That being the case, there may also be an opportunity here. Wherever the caped crusader goes, themes of copycats, vigilantism and taking the law into your own hands invariably follow. If Warner Bros. could somehow harness and control that same fanatical fervour as a creative force, they might be able to show us something new all over again – a truly UGC campaign, the universe of Nolan’s Gotham explored and extended by its most ardent inhabitants. 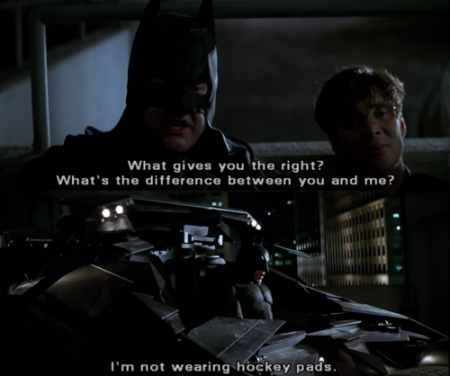 « Distribution Redistributed Too big to fail? »