The Favatar pitches Pirates & Dinosaurs to an imaginary room. And nails it.

A couple of weeks ago Glass Eye worked with Paramount Pictures and Xbox to run a world-first film-maker Q&A on the newly launched Xbox 360 Avatar Kinect.

It saw Cowboys & Aliens director Jon Favreau (AKA ‘The Favatar’) and producer Scott Rosenberg meeting with and taking questions from assorted game and tech bloggers on the Xbox platform, with Kinect’s full-body gesture recognition bringing the event to life in a way that’s hopefully evident from the highlights video we put together as part of our media pack for the event:

These type of events are never straightforward, and require careful planning – no-one who’s worked with bleeding-edge technology turns up with 15 minutes to go and expects it to do what it’s told. That said when things go right it definitely adds something new to the mix of a busy press junket, putting film-makers face to virtual face with bloggers and fans from all over the international marketplace.

A quick look at some of our previous ‘highlights’ videos (a couple of which I’m embedding below) should give you a sense that, while the events themselves are always, well, eventful, they don’t necessarily make for great viewing. This is why Avatar Kinect has the potential to be such an important development, in terms of body language now playing a part in a virtual conversation.

With so many social platforms busy breaking down traditional barriers between film-makers and fans – nobody knows this better than the early-adopting Mr Favreau and his 1,096,380 Twitter followers – our focus remains on trying to understand how we can extend this relationship in new and interesting ways, using platforms and technology like Avatar Kinect to make possible connections and conversation that simply couldn’t happen any other way. 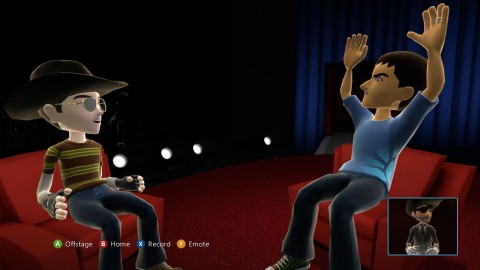 Platinum Studios CEO Scott Rosenberg gesticulates wildly at me, for reasons history does not record. 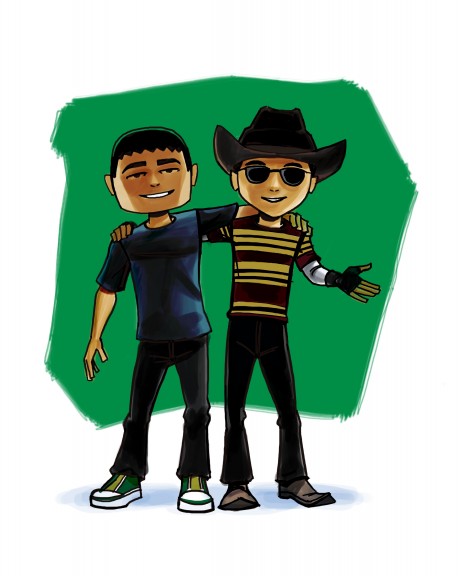 Scott and I, as kindly rendered by one of the artists over at Platinum Studios.

A world-first Q&A with Jon Favreau on the newly launched Xbox 360 Avatar Kinect.