Our Screen Award-nominated online marketing campaign for ATOMIC BLONDE is one of the most comprehensive programmes of digital and interactive content we’ve created for a single theatrical release, comprising localisable microsites, social content and an extensive banner toolkit.

Here’s the showreel we put together to spearhead our award submission, followed by a closer look at some of the individual strands:

Central to this campaign was the challenge of bringing a female protagonist to a genre traditionally dominated by men. This quiz tackled it head-on, putting Agent Broughton shoulder-to-shoulder with two of the biggest names in the business. 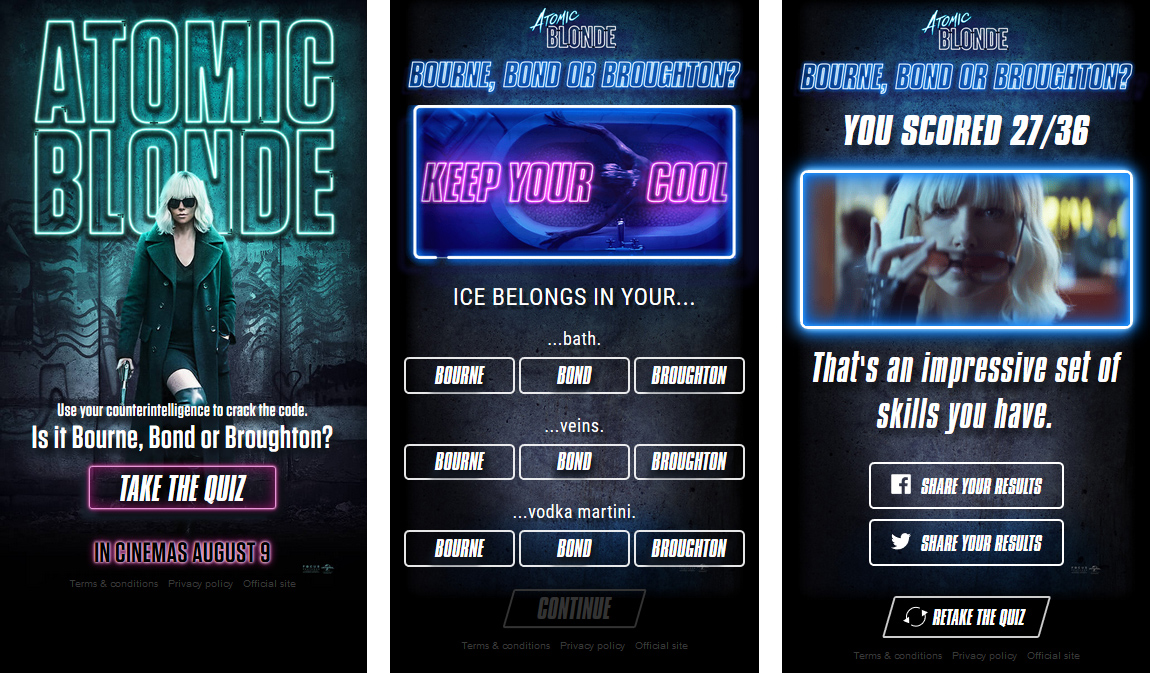 Twelve questions tested fans’ knowledge in a playful and engaging way, before serving up their score with a graphical outcome optimised for sharing on Facebook, Twitter and beyond.

Our GIF maker gave fans the one-sheet and a selection of other creative to play with from across the wider campaign, featuring the film’s distinctive colour grade and personalised neon text. 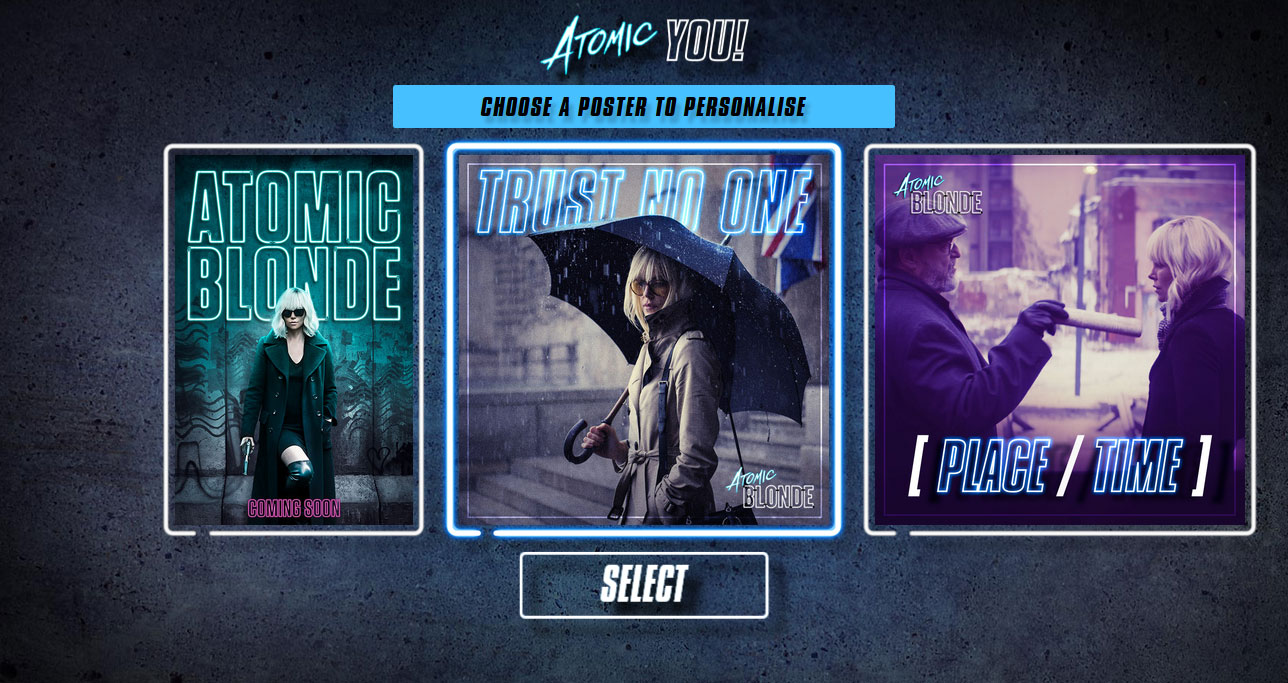 Using a combination of ImageMagick and Amazon Lambda the application was capable of outputting personalised artwork and animation in various formats for a large number of concurrent users without any penalty performance-wise.

Working from the feature these spots were conceived for social from the ground up, using scenes and sequences showing Agent Broughton at her improvisational ass-kicking best.

Ahead of a round-up of the various other strands of social content we produced here’s a look at a couple of the placements we delivered as part of the UK display campaign, working from an international banner toolkit also developed by Glass Eye.

Central to Agent Broughton’s appeal is her uncompromising attitude to, well, everything. She spends pretty much the entire movie taking down walls, putting her fist into a few stereotypes in the process.

For the more formal pieces we doubled down on key strengths of the movie: action, star power, on-screen chemistry, all the time staying true to its polished and distinctive visual style.

Finally we produced a series of style-focused vertical videos. Action thrillers can be a tough sell to female audiences and this felt worth putting into focus to soften the gender skew.

…here’s a snazzy overview we created following the nomination of the campaign for a Screen Award. Click to embiggen: 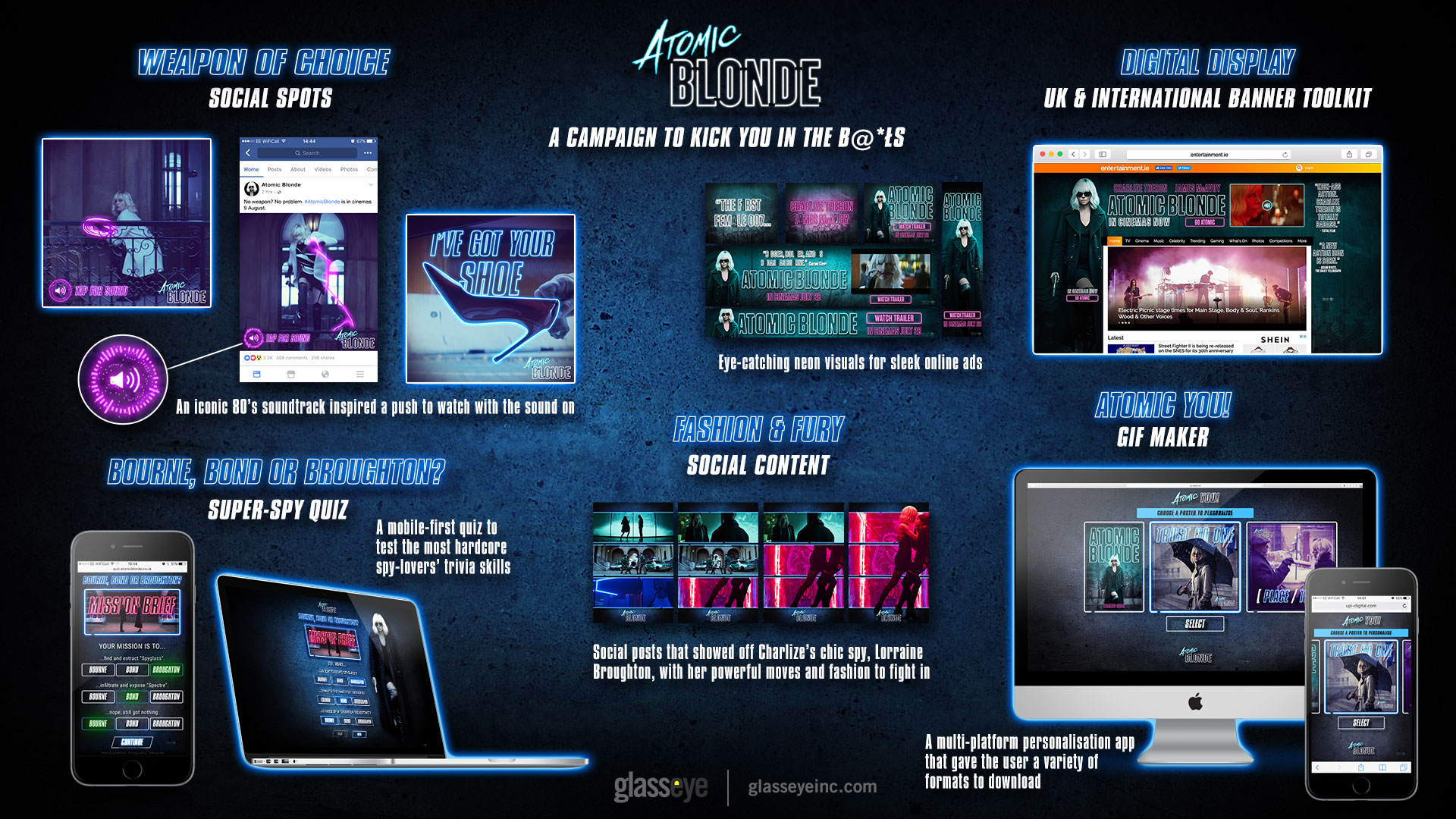