Our vision for Glass Eye has always been to balance client work with the pursuit of a few ideas of our own. As such, the occasion of our two-year anniversary is a happy one on which to unveil the first of our ‘special projects’: Juxtapose. 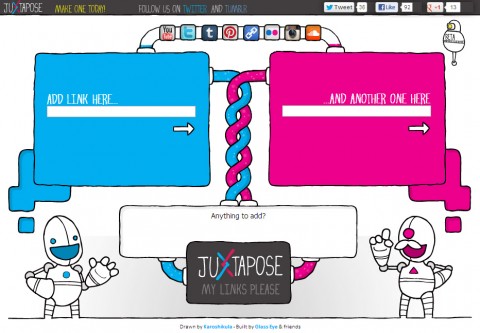 “Hypertext, inclusive of its hyperlinks, is revolutionizing how information is stored, accessed and created, and it is undoubtedly one of the greatest inventions of our time. However, it will likely be many years before the full implications of this invention are known and appreciated.”
The Linux Information Project, 2006 – http://www.linfo.org/hyperlink.html

Today sees the launch of Juxtapose – a link shortener that lets you share two links instead of just one. And, by the immediate adjacency of said links, imply meaning.

Without Juxtapose, the Internet threatens to become a ghetto of unchallenged points-of-view. With it, we can usher in a new era of enlightenment, open-mindedness and polite disagreement.

In a world where links are now a pervasive form of social currency, Juxtapose is here to remind us all that there are two sides to every story. Especially when that story is an argument.

Juxtapose was developed by interactive marketing agency Glass Eye after co-founder Dan Light discovered that there was no easy to way to share pictures of Rupert Murdoch and Montgomery Burns using a single link.

Says Light: “Once we realised the domain name was available, ploughing precious time and resources into something with no obvious business model behind it was a complete no-brainer. We’ll all be astonished if the site’s still online this time next year.”

Juxtapose is currently in Beta, but Dan and fellow co-founder Saffron Tucker plan a formal launch later in the year where they will perform – and juxtapose – the duet from Dirty Dancing.

Other info
Our favourite juxtapositions will be featured at http://juxtaposin.tumblr.com. For the latest and greatest you can also keep up with us on the twitters at http://twitter.com/juxtaposin. We do not have a Facebook page.

Jamillah Knowles was kind enough to write us a launch piece over on The Next Web, as a result of which we’ve seen a flurry of traffic to the site and a volley of juxtapositions, quickly reinforcing just how close to the weirdface we’re going to be working on this one.

In the mean time, we’re treating the site as a work-in-progress: a proving ground for experiments with different community and content platforms, and a showcase for the work of some our favourite designers, developers, artists and illustrators, of whom kudos is already due to Georgi, Henry and Nic.

« You know, for kids! The social skunkworks »